Well it is 2016, a fresh new year of new hopes and goals. I have a strong one that I hope to achieve. Last year I made a big decision and decided to get a second Cochlear™ implant. Just before Christmas, Professor Kong operated on me, using the Nucleus CI522 cochlear implant on my right side. I have had my first Cochlear implant on my left ear for 20 years.

I am yet to tell you about my two university exchanges that I was part of in the past two years. Briefly last year I was living in Potsdam, upstate New York studying at Clarkson University for 5 months. It was this adventure that convinced me it was time to get another Cochlear implant. As much as I love meeting and being surrounded by new people, I found this trip particularly challenging, having said that, I still had the time of my life. There was a large group of exchange students at Clarkson with different accents and not everyone knew I was deaf. I struggled to understand what some people were saying and with only having my left implant I could hear someone say my name but didn’t know where the sound was coming from. It is these kinds of situations that are frustrating for me. I lost track of conversations and didn’t approach people as I was worried that I could not hear or understand their accent. I believe it made me appear somewhat shy or quiet. I do not want people to think that of me. Being shy or quiet is not who I am. I am a CONFIDENT person. I want people to see that in me. So there you go, this was the turning point that led me to a second Cochlear implant.

My operation was two and a half hours and took place at the Mater Hospital in Crows Nest. I stayed one night in the hospital. The recovery took longer than I thought, but I assume everyone recovers differently. Unfortunately I had to spend Christmas Day in bed and cancel my New Years Eve road trip to Byron Bay, but I know it will be worth it. 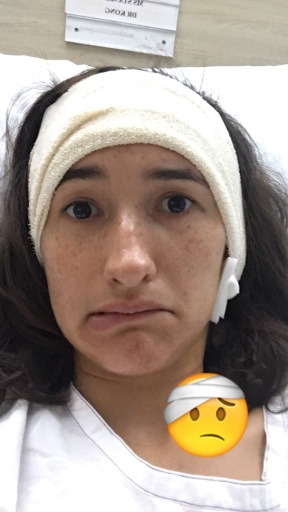 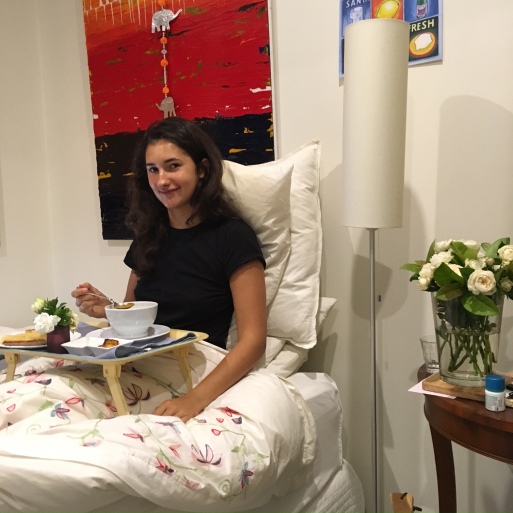 “My first night home after my operation, thanks to mumma spoiling me with flowers and pumpkin soup”

My switch on was on the 13th of January this year. Because I knew what to expect from my first implant, it was not as exciting as my first switch on (look at previous post to see YouTube clip of my switch on). I had a low expectation. I thought I would be hearing crackling noises, instead it was beeping noises. It’s hard to explain the process of how to improve my hearing. Friends have asked, how are you hearing? You must be hearing so much better. But that is not the case, not yet. I explain, imagine having new legs and having to walk for the first time, clearly you cannot run a marathon. It is all about taking baby steps. And that’s where I am. Just starting small, listening with the second Cochlear implant alone, reading kids’ books out loud to comprehend the new sounds and match them with the words. Mum and I have been doing homework exercises where she will say two words then repeat one word, I am to recognise which word I believe she said. This process is allowing me to familiarise the new sounds to the words.

So this is my new goal for 2016, to train my brain to interpret the new sounds from the second Cochlear implant.

Thanks for reading!
From Isabelle.

One thought on “A new year, a new ear”